Welcome to Odyssey Overland’s 2012 South American Explorer expedition.  As I write this we are in Puerto Madryn, a (mere) 18-hour bus ride south of Buenos Aires.  A bus?  Yes, well, thanks to a few technical difficulties experienced by our shipping company, we are starting this expedition while our truck is still on the ship on which it has travelled from the UK!  But this isn’t just any bus – the long distance coaches in South America have to be seen to be believed – massive seats that recline almost flat, food and drinks presented to you on a tray during the journey, and a glass of champagne after dinner (well, the champagne was promised, but didn't seem to appear...)  Not quite overlanding as we know it!  But it should only be a couple of days until we are reunited with our trusty truck Ithaca and we will have plenty of chance to get to know her over the next 6+ months.

A quick introduction to the group – here we all are (well, except for Pete who was the cameraman) at a steakhouse (or parilla) in Buenos Aires on the first night of the expedition. 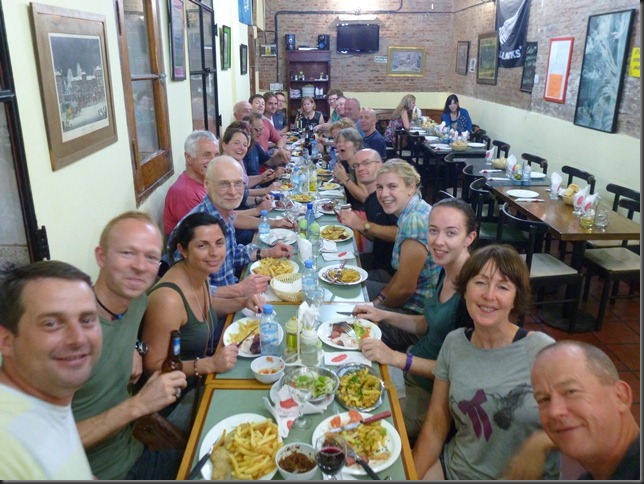 We are delighted to have such a great group of people on the trip and are really looking forward to exploring South America together.

So what have we been up to so far?  The trip started in Buenos Aires on Tuesday, and many of the group chose to come over a few days early to explore the city and get into the Argentinian vibe.  Forget jetlag, the most difficult adjustment is to eating times, with dinner often eaten at 10pm or later!  Speaking of eating, it would be remiss of me not to mention the food that we have all been enjoying here in Buenos Aires.  Unfortunately not exactly a vegetarian’s paradise, the focus is on the excellent Argentine beef, bife de chorizo (sirloin steak), and bife de lomo (tenderloin steak) being particular favourites (the morchilla (blood sausage) less so…)  Serving sizes are usually huge, thoughts of losing weight on the trip quickly cast aside in the face of the meat feasts we have been presented with!  And the delicious dulce de leche isn’t helping either (a sort of caramelised condensed milk, wonderful spread on bread, or Heather’s preferred method of consumption, to eat it with a spoon!)
Greater Buenos Aires is the second largest metropolitan area in South America after Sao Paolo in Brazil, and more than 30% of Argentina’s population live in the city, yet it still retains a fairly relaxed and calm feel (perhaps except for the taxi drivers; Sue, Mikkel and I had a particularly interesting journey with AC DC on full volume which seemed to spur the driver on in his efforts to weave in and out of the heavy peak hour traffic).  The people we have met have been very friendly, smiling kindly at our attempts to speak in Spanish (which can only improve from here!) and assisting us thereafter in embarrassingly good English.

The city of Buenos Aires is split into a number of different barrios or areas, and each has quite a different personality.

La Boca is the most (literally) colourful barrio, with brightly coloured corrugated iron buildings on its famous Caminito street.  Add to that a bit of street theatre, tango demonstrations and the occasional drumming band, and it is a happening, vibey place, well worth a wander and a great place to sit in a cafe and watch the world go by.  La Boca is also home to one of Buenos Aires’ two football (soccer) teams – Boca Juniors – and their stadium continues the colourful theme.  Football is not just a sport here, it is a passion and tensions can run high when rival teams meet! 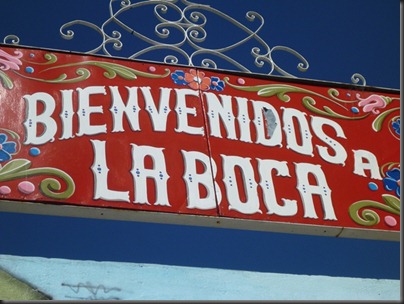 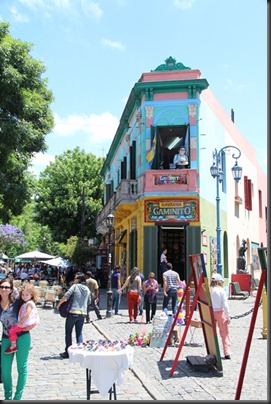 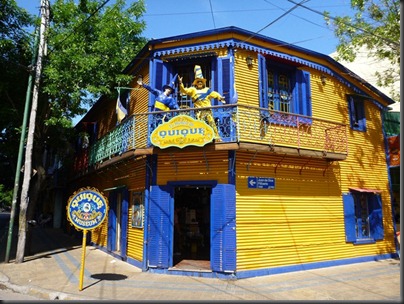 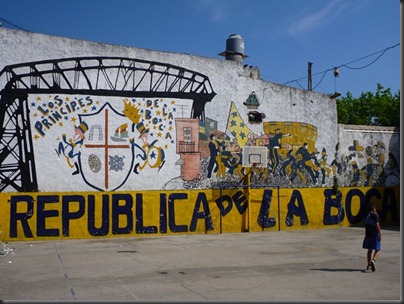 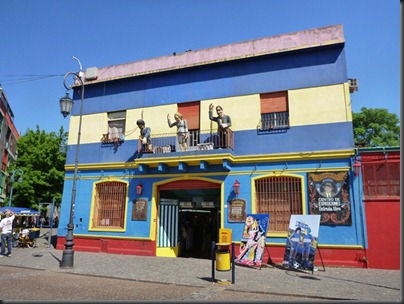 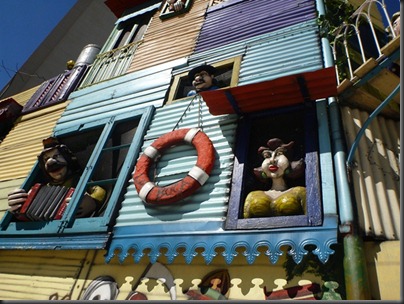 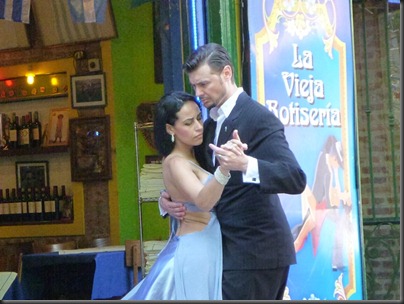 Tango is another passion in Argentina, and many of the restaurants around the Plaza Dorrego offer the chance to watch a tango show.  Not content to be merely an audience member, Francois briefly took to the stage as well. 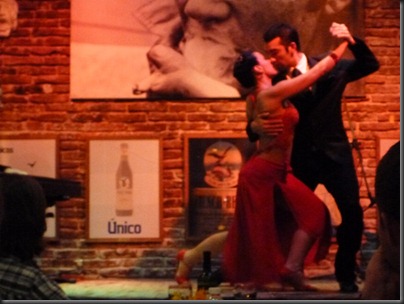 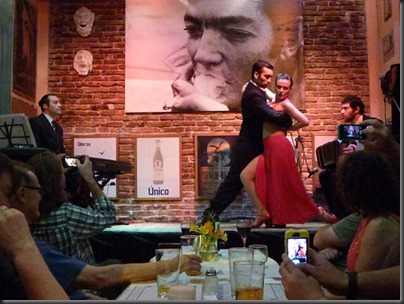 On Sundays, Plaza Dorrego hosts an antique market where you can buy anything from knives and antique pistols to wedding dresses, car registration plates and the wonderful sifonaza (soda water bottles) in every colour imaginable. 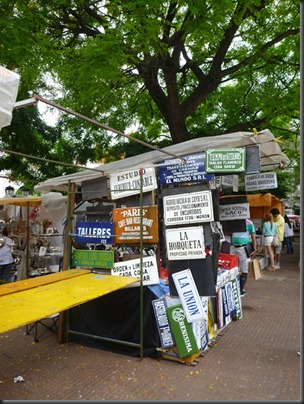 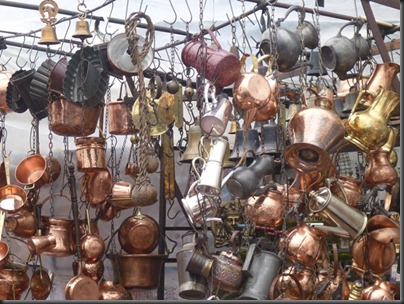 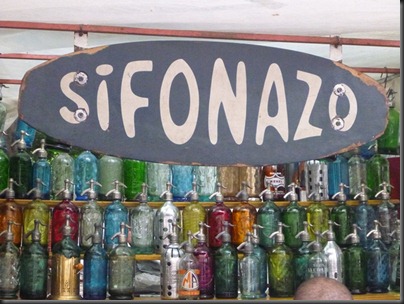 Buenos Aires is also known as the “Paris of South America”, perhaps it is the classic European architecture that draws the comparison, or the love of outdoor cafes where you can watch the world go by? 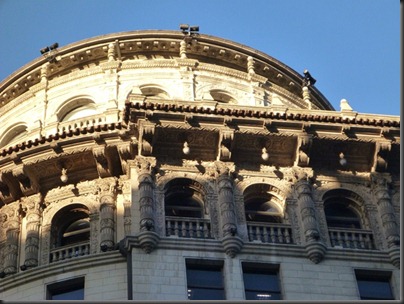 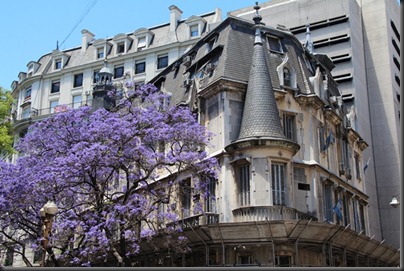 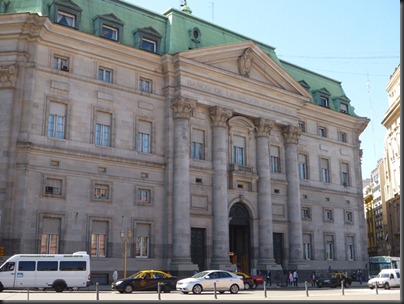 Bs As (as it is locally referred to) also claims the title “City of Design”, and there are some striking modern architecture and sculptures that sit alongside the more classic designs.  The unexpectedly beautiful Floralis Generica is a huge metal flower whose petals are designed to close at night (although currently the mechanism is broken, and quotes range up to US$200,000 to fix it). 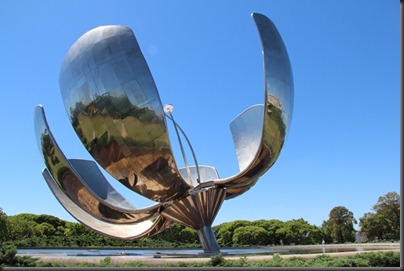 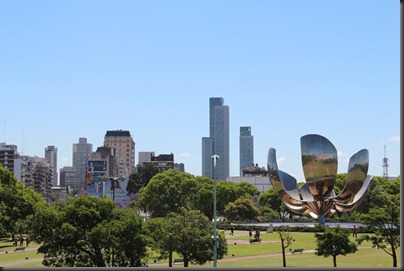 The Puerte de la Mujer at the upmarket Puerto Madero canalside development also adds to the view from the cafes and restaurants that line the canal. 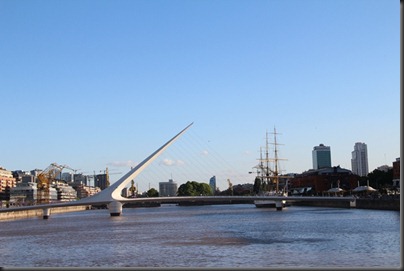 Bs As’s top tourist attraction is the Cementerio de la Recoleta, also said to be the most expensive real estate in town.  The cementary resembles a suburb in itself, with streets of marble mausoleums decorated with intricate carvings and beautiful statues.  It really has to be seen to be believed.  The most famous resident of the cemetery is Eva “Evita” Peron, such is the ongoing dedication to her that her family’s mausoleum is always decorated with floral tributes. 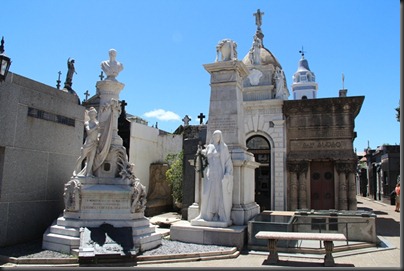 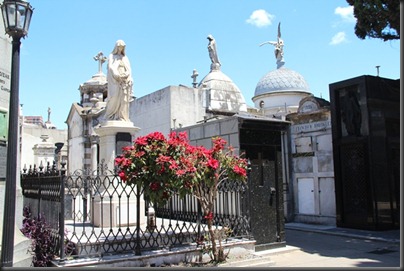 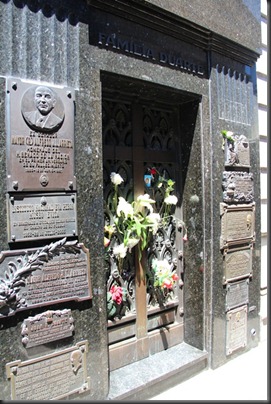 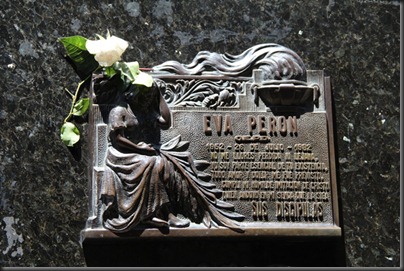 After a good couple of days exploring Bs As by foot, tram, train and bus, we were all ready to start heading south, leaving cities behind us for a while.  After taking taxis to the bus station, a few nervous moments when the bus was running 15 minutes late, and the coach drivers’ surprise at how much luggage we seemed to all have, we were settled into our luxury coach for the 1,300km overnight journey to Puerto Madryn, gateway to one of Argentina’s top wildlife destinations, the Valdez Peninsula, which we will be exploring on a full day tour tomorrow in search of the areas many land and marine based animals.  It is a fantastic feeling to be on the road, after all the planning and preparations that have happened over the past couple of years, and it is difficult to know who is more excited to be here – the crew or the expedition members!  One thing is for sure, we are all looking forward to an incredible journey!
Posted by Odyssey Overland at 18:21 1 comment: