After the relaxation of Christmas, we thought it was time to get the adrenalin flowing and so we headed to Bariloche, one of Argentina’s centres for adventure activities.

Bariloche is located on the shores of Lago Nahuel Huapi, another stunning setting with snow capped mountains and crystal clear blue lakes, set off with a brilliant blue sky.  After the quiet and solitude of Los Alerces National Park, Bariloche came as a bit of a shock, particularly as it seemed that every teenager in Argentina was there on holidays!  But we quickly adapted and realised the benefits of being in a town – restaurants, bars, ice cream parlours and, for some, most importantly, we were back in the land of internet.  But the town itself wasn’t our reason for coming here, it was access to the great activities on offer. 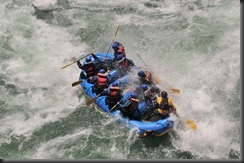 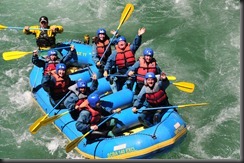 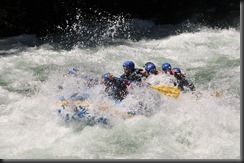 Terry and Lesley opted for the more sedate option of paragliding over the beautiful forest and lake surrounding Bariloche, while Anthony headed off on a mega bike ride which took him not 18-19km as we mistakenly heard, but in fact 80-90km!  Duncan and Angela explored the nearby Nahuel Huapi National Park on foot and by boat, where they were able to see a waterfall and a 1,500 year old Alerces tree.  The pumas that we are warned about in all the national parks still remained elusive though…

All of the meat-eaters in the group also decided to embark upon a bit of extreme eating, tackling some epic steaks, chorizo sausages and meat platters at a fantastic restaurant with a charismatic owner, Tony – Pete definitely had a bit of knife envy! 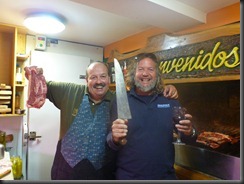 Bariloche is renowned for its chocolate, and there is a chocolate museum that several of the group went through, while others discovered that if you stayed in the many chocolate shops for a while, the samples kept coming!  And at USD 60++ per kilo for much of the chocolate on offer, it was no surprise that we were trying to get a taste for free!

Even Ithaca had a chance to do a bit of adventure sport while in Bariloche, with a crawler-gear inducing climb up the narrow driveway to the campsite, which of course she negotiated with style and minimal effort!

Leaving Bariloche behind, we took the opportunity to drive along the stunning 7 Lakes route – plenty of photo stops enroute as we wound our way through the lake district. 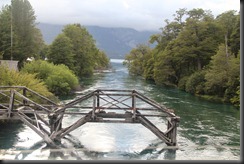 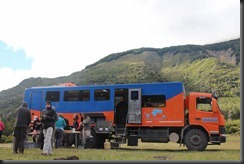 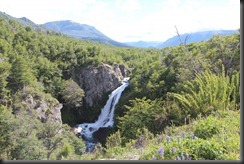 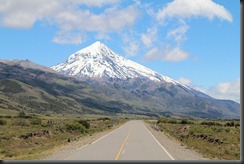 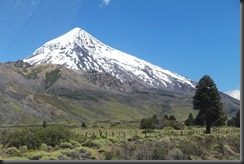 Then it was time for us to cross, once again, into Chile (confused yet?  Cause we are!  And our passports are getting full quite quickly with all these stamps in and out!).  Our destination, the town of Pucon.

Where Bariloche was busy and fairly hectic, Pucon was chilled and relaxed.  Which is perhaps surprising for a city that lives in sight of the active Villarrica volcano!  But it is the volcano that has made Pucon what it is today, the biggest drawcard for the town is the opportunity to climb Villarrica.  And early on New Years’ Eve, that’s exactly what most of the group headed off to attempt to do.  Although not a technical climb, it is a solid 4-5 hour walk up a rather large and at times very steep hill which is largely snow-covered at this time of year, so crampons and ice axes were required for most of the day! 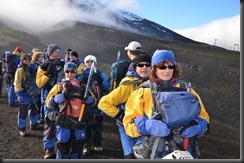 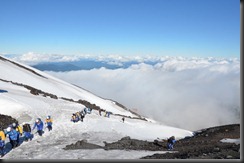 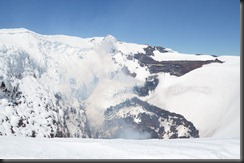 Congratulations to all those who attempted the climb (it really is quite an undertaking!), and to all those who made the summit successfully!
Having reached the summit, the only way was down.  But instead of slogging back down the way they had come up, the return involved some serious fun in the form of sliding down the hill on a toboggan or just the seat of your trousers.  It is an epic day out, and an unforgettable way to say goodbye to 2012.

While the volcano climbers were hard at work ascending to 2,800m above sea level, Neil, Steve, Anthony and Kirsten headed out to enjoy a much more sedate morning of zip-lining.  It was a wonderful and different way to experience the forest and rivers surrounding Pucon.  Anthony continued his bike tour of South America, this time only a short 30km hop to a lake which he described as “refreshing”, think we can all assume it was freezing!

A slightly (and in some cases very much!) warmer water experience was a visit to one of the hot springs in the area.  Angela and Sue headed off for a girly day of soaking in the posh hot springs, while Geoff, Karen, Steve, Francois, Lisa, Ken, Jeanne, Robin, Vanessa, Duncan, Tony and Kirsten stayed a bit closer to home, visiting the Los Pozones hot springs just outside Pucon.  The pools varied widely in temperature, and then there was the added excitement (for those who dared) of a dip in the freezing cold river! 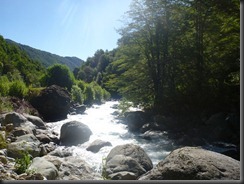 For others, visiting the cafes and restaurants was more than enough activity, and just enjoying the stunning views over Lago Villarrica towards the volcano itself. 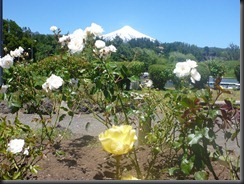 New Years’ Eve was celebrated with another epic Odyssey feast, the stand out of which was the beef fillet which was positively melt-in-the-mouth!  The arrival of 2013 was toasted with local sparkling wine and hugs and countless cries of “Happy New Year”.  In town there was a fireworks display which some of the group headed down to watch, while others caught glimpses of them over the top of the campsite trees.  The general consensus was that 2013 had started off pretty well, and we were looking forward to seeing what else it had in store for us!