Exploring the Pacific Coast of Peru

Descending from the Andes, albeit only briefly, our first stop in Peru was on the beach, and what a beautiful beach it was!  Camping on the sand, with waves crashing on the beach and blue cloudless skies above, it was a couple of days of beach paradise.  Relaxation was the order of the day for most of the group, along with trying the famous cerviche (fish “cooked” in lime juice served with onions and sides of sweet potato and giant corn kernels) and other great seafood based meals, for others this was the place to try surfing for the first time.  Success all round as everyone, Heather, Francois, Lisa, Anthony and Vanessa were able to stand up!
Camping on a beach wouldn’t be complete without a beach BBQ, and that’s just what we did on two of our nights here.  It only took a small amount of subtle encouragement from Rogan before we all found ourselves limbo’ing and picking up cardboard boxes without using our hands…  perhaps the photos can explain better?  It was great fun all round – congratulations to Francois, our limbo king, and Sue, our cardboard-box-picking-up queen! 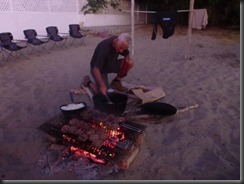 Our journey along the Pacific Coast of Peru continued as we headed for Huanchaco, a small surfing and fishing town.  Slowed by traffic through the coastal towns, and a policeman or two on the make, we arrived late into town, quickly set up tents and then headed to the nearby restaurants for dinner.  Sitting on the beach watching the sun set would be enough reason to visit this town, but the real attractions are the nearby ruins of Chan Chan and Huaca de Luna / Huaca de Sol.
Dating from the pre-Inca Chimu era, around 1300AD, Chan Chan is the largest adobe (sand / mud brick) city in the world, and at its peak housed 60,000 inhabitants.  Each of the 9 Chimu kings built themselves a new palace, and one of these palaces is open to tours which we did with a guide, Eduardo.  Extensive decoration of the walls depicting scenes mainly reflecting the importance of the sea to their culture, and some of this decoration remains or has been restored and is now protected by shelters – the increase in rain in the area due to extensive irrigation schemes is causing damage to the ruins which have stood for hundreds of years. 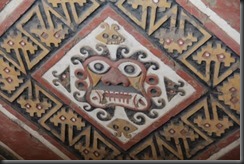 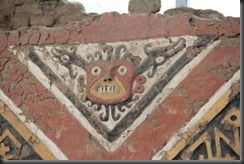 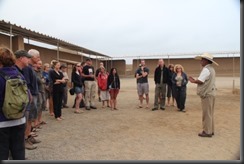 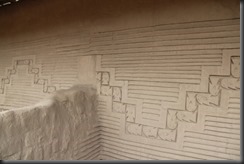 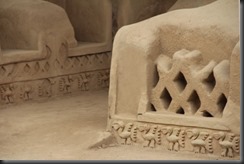 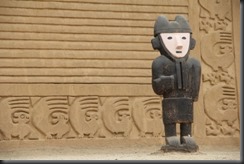 After Chan Chan we headed to the Moche era (dating from around 800AD) ruins of Huaca de Luna.  Here some of the painted murals remain, and excavation is continuing to uncover more.  Human sacrifice seemed to feature frequently in our guide’s explanation of the ruins, which he enthusiastically demonstrated with violent hand motions.  The decoration on the upper levels of the pyramid-shaped temple were impressive, but the “wow” moment came in the ceremonial hall where 6 stories of decoration towered above us.  Excavation and protection if the ruins is continuing, perhaps they will be  even more impressive in the future as more is uncovered? 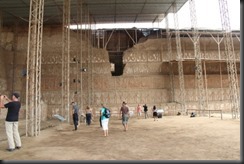 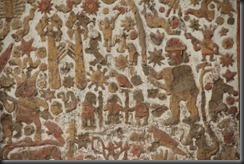 Leaving the coast behind briefly, it was time to revisit our old friend, the Andes.  A spectacular drive took us through rocky desert, fertille valleys, stunning mountains and a 4,200m pass enroute to Huaraz, a city nestled amongst snow-capped peaks.  As Huaraz sits at just over 3,000m above sea level, we were all able to feel the effects of altitude as we huffed and puffed up the stairs to the roof top terrace, but the views were worth it!  Thanks to Cook Group 5, a great meal of chicken schnitzel and the best salad of the trip was enjoyed that night, served at cosy tables upstairs where we sheltered from the cold. 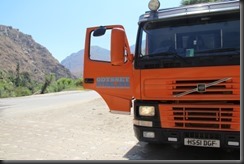 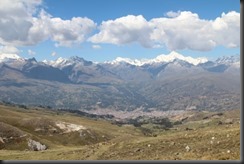 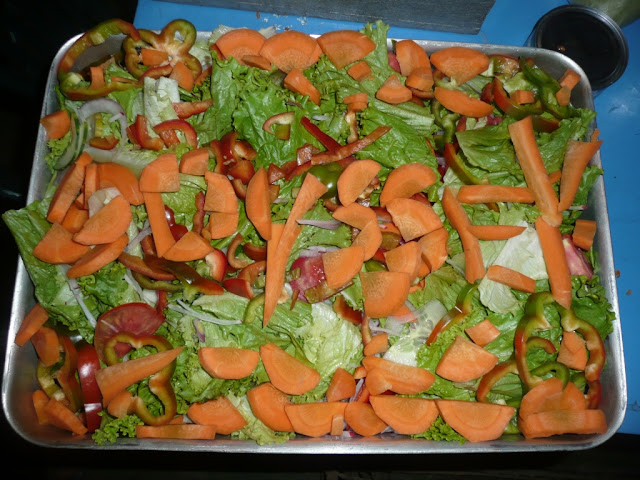 Mikkel and Francois headed off on an epic 9 hour walk to Laguna 69, while others decided to try a bit of rock climbing.  The local food market was good for a wander, although one aisle did make some of us contemplate vegetarianism…
We all enjoyed a group meal out to continue to farewell Pete, this time pizzas, steaks and pastas were the order of the day, washed down with a pisco sour or two.  His farewell gift is sure to come in useful on future expeditions!

Descending down from the Andes we reached Peru’s capital, Lima.  Our hotel was located just a short walk from the Plaza de Armas, the main square in Lima which is surrounded by stunning buildings.  Lima is a funky city, with heaps to keep everyone occupied – including excavations which mesmerised Robin and Geoff.  As Pete was flying out of Lima, we all met up for one last farewell, a couple of drinks and even a few tears, before sending him on his way with our best wishes for a good trip back to the UK and a successful next expedition.
Driving out of Lima on a Monday morning was an experience!  Bus queues, the likes of which we have never seen before, spilled out onto the motorway, cars pushed, tooted, swerved and jostled for position.  We were fortunately going against the flow of traffic, but it didn’t stop buses from slamming on their brakes in front of us, taxis weaving amongst the traffic and all manner of early morning excitement!  Makes the M25 look like a cake walk!
We were only going a couple of hours south, heading for the town of Paracas and the Paracas National Park.  This coastal desert park is apparently full of wildlife, although it proved somewhat elusive, but the views were stunning and our campsite for the night on the beach was a wonderful spot.
The Ballestas Islands, just off the coast of Paracas, are home to an extraordinary number of birds so we all jumped on a boat and headed out to see them – Cormorants, Inca Terns, Penguins, Blue-Footed Boobies and Peruvian Boobies, Peruvian Pelicans, as well as sea lions lounging on the rocks – it was a great way to spend a morning.  Enroute we also had the chance to see the unusual candelabra geoglyph that has been carved into the side of a sand dune.  The when, who and why of the candelabra is unknown, although theories abound, and its mystical nature put us in good stead for our visit to Nazca later in the week. 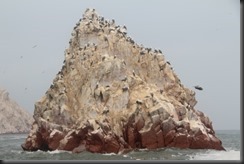 The tiny oasis town of Huacachina is famous for its sandboarding and dune buggy rides, a swift bit of organisation saw us piling into dune buggies and heading off into the dunes in the late afternoon.  Sandboarding can be as fast or slow as you like, and you can keep it simple by lying down on the board, or go a bit more extreme and use a snowboard, although even for experienced snowboarders, the experience of sliding down the sand is quite different!  Lying on the board at the top of a dune which looks almost impossibly steep is enough to get anyone’s heart going, but then with a deep breath you set off down the dune, getting braver and faster with each run.  It is a huge amount of fun, the only downside being the vast quantity of sand that you will be carrying around with you for the next week or so - it gets everywhere!
Returning in one piece from sandboarding, we loaded our sandy selves onto the truck for a short hop south to Nazca.  A nice campsite with a pool greeted us, and the showers very welcome.  In the afternoon we headed out to the Chauchilla Cemetery which consists of a series of shallow tombs in which lie mummies, bones and skulls dating back 1,000 years.  A unusual (and at times a bit creepy) sight! 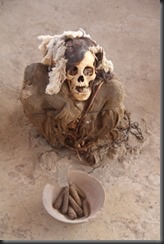 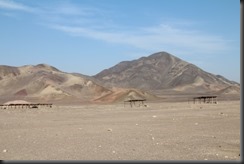 Our stop in Nazca offered everyone the opportunity to take a flight seeing trip over the Nazca lines which is the only way to get an appreciation of this unusual archaeological site, so early the next morning we headed to the airport to board a couple of small planes.  The when, who and why of the extensive lines, geometric patterns and designs is unknown, and while plenty of theories abound, the most widely accepted theory currently is that they were offerings to the gods to alleviate drought.  Whatever their origin, they are an astounding sight – the sheer scale of the lines is incredible, and some of the designs are amazing.  The flight itself is also part of the fun, the sharp banking turns which give everyone the chance to see the lines also mean it isn’t a flight for the weak of stomach!

Our last stop on the Peruvian coast was a gorgeous little bay, a wonderful place to relax for the afternoon, watching the boobies dive-bombing into the surf, strolling around the nearby ruins and coastal paths, and for the brave, attempting a swim in the somewhat chilly water!  With tents right on the beach, a campfire, millions of stars above us and the waves crashing onto the shore, it was a great way to say farewell to the Pacific coast of Peru which has provided us with stunning coastal scenery.  It is a harsh but beautiful landscape, dry and largely unpopulated, and it has surprised many of us with the contrast of the desert meeting the sea and the fantastic sights and activities we have enjoyed while travelling through this part of Peru.

Posted by Odyssey Overland at 20:05