Leaving the coast behind we returned to the mountains, heading for the city of Arequipa at 2,800m above sea level.  Sitting in the shadow of the volcano Mt Misti, the historical centre of the city is constructed from sillar a type of white volcanic stone.  The city’s main square, Plaza de Armas is surrounded by stunning buildings, a truly impressive sight and arguably the most beautiful of all the squares we had seen to date.  But for many the highlight was the Monastery of Santa Catalina.  Set up by a wealthy widow, the nuns who joined the monastery predominantly came from wealthy Spanish families who could afford to pay the not inconsiderable dowry required to gain entry.  The monastery is beautifully decorated with frescoes and walls painted in vivid blue and terracotta orange.  Although the monastery continues to be home to around 20 nuns, the majority of the complex is now open for tours, a guide helping to explain the context and background to the monastery and the way of life within.
Leaving Arequipa was to prove a somewhat challenging event, but after a false start we eventually hit the (right) road heading into the high altitude grasslands, crossing passes up to 4,500m.  Population was sparse, but there were plenty of llamas, alpacas and vicunas (endangered high altitude animals in the same family as llamas), and flamingos, and the scenery was stunning.
As darkness threatened to fall, we found a great bushcamp, sheltered from the road and the wind, and offering us a fantastic star-filled sky.  The clear sky was not everyone’s friend however, with a heavy frost falling and reinforcing the importance of a good sleeping bag!

With many layers of clothing on, and a hearty meal of porridge inside us, we hit the road heading for Cusco, a city which has more than enough attractions in its own right to warrant a visit, but is also the jumping off point for our long-awaited visits to Machu Picchu and treks through the Andes.

With so many options and activities in and around Cusco, there was always something going on!  The first to head off were the group doing a community-tourism trek, an alternative to the classic and well-worn Inca Trail trek.  With a focus on interaction with local communities rather than ancient ruins, this trek offers a very different perspective and experience – during the trek the group saw only one other trekker – unlike the Inca Trail’s 500 per day.  High altitude trekking isn’t for the faint hearted, and some of our group definitely endured rather than enjoyed parts of the trek, but ultimately all of the group found the experience to be hugely rewarding, and it was rated as one of the trip highlights by many of the group, despite the hardships.
While the trekkers were busy walking up hill and down dale, some of the rest of us headed out on a more sedate day trip to the Sacred Valley.  We try as much as possible to get off and stay off the beaten track, but this trip saw us firmly ON the beaten track as we were taken from major tourist attraction to major tourist attraction.  Being part of this mass tourism was confronting, especially after the relative peace and tranquillity of the Peruvian coast and of countries such as Colombia and Venezuela, but we took a deep breath and remembered that there is a reason that the ruins of Pisac and Ollantaytambo are so often visited – because they are incredible!  Built by the Incas (well, actually, built by the Quechuas at the behest of the Incas), these sites demonstrate the incredible engineering feats achieved so many years ago, still impressive now even though only parts remain.  Farming terraces extend high up hills, temples sitting at the top of hills are constructed with impossibly huge stones that have been quarried many kilometres away and transported to the site high on the hill.  Different types of stonework demarcating different types of buildings.  And all of this at an altitude that still, after all this time, sneaks up on you and takes your breath away every now and then! 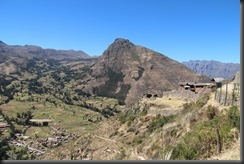 In Cusco itself, the ruins of Sacsayhuaman were rated highly by those who visited, as were the churches, museums and markets.  Most of our night time endeavours revolved around food (alpaca curry) and the occasional beverage of course (how could Ken be expected to refuse a Guinness when in an Irish Bar?), although some of us also got caught up in a night time procession and fireworks display in the main square which featured some nightmare-worthy masks and costumes. 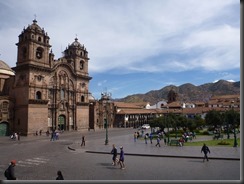 Meeting up with our trekkers at the train station in Ollantaytambo we boarded the train to Aguas Calientes, where we would spend the night before a (very) early start the next morning to get up to Machu Picchu itself.
No matter how many times you have seen images of Machu PIcchu, it is a breathtaking and awe-inspiring when you see it in person!  Getting there early gave us the chance to see it before it was too busy, and although the sun didn’t play along initially, choosing to hide behind clouds instead, the view was amazing.  Our guides helped to explain the ruins, showing us around the site and explaining the “how” and “when” of construction, although the “why” remains open to interpretation.
Huaynapicchu is a striking part of the Machu Picchu scenery, and most of the group took the opportunity to climb up it as well for a different view of the ruins.  It was a challenging walk, but worth it for the views, although there were a few sore legs the next day!
After almost a week in and around Cusco enjoying the amazing experiences on offer, it was time to get back on the road and head towards the Bolivian border.  We stopped off for a night at the Sillustani ruins, funerary towers with amazing stonework on a hill overlooking a stunning lake.  An overzealous whistle blower at the ruins ensured we walked in the designated direction around the site and a traditionally dressed lady with a baby vicuna provided more photo opportunities, and then we headed back down to the truck and an Odyssey first – a bushcamp with upgrade options.  For a few Peruvian Soles, you could sleep in the museum, a warmer prospect than tents that attracted some of the group, although the slightly creepy room-mates put most of us off (clearly not Geoff though!). 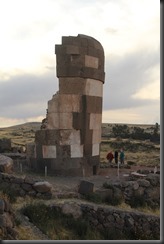 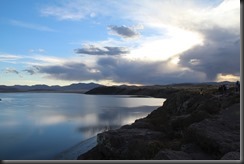 Our final stop in Peru was the town of Puno on the shores of Lake Titicaca, the largest alpine lake in the world, sitting at 3,800m above sea level.  It was only a short drive from Sillustani, so by mid morning we were all boarding a boat trip to head out on the lake and see the Uros floating islands.  The floating islands closest to Puno have been set up to receive tourists, the traditional ways of life are still very much in evidence, but their incomes from fishing and handicrafts are also supplemented by the tourist dollar.  As we sat in the bright sunshine listening to explanations of how way the islands are constructed and the way of life on the islands our guide warned us – don’t be fooled, you are seeing this at the best time of year, in winter everything is cold, wet and soggy, and only those who have been born into this life can survive out here – bringing us firmly back to reality!  There were plenty of handicrafts available for us to buy, and many of us succumbed.  A boat trip in a traditional style canoe took us across to another island where there was a simple cafe and a rather romantic bridge.  It was a great way to spend a morning getting a glimpse into a very different way of life. 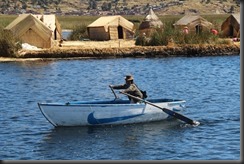 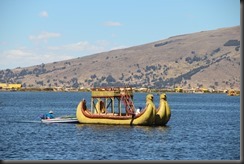 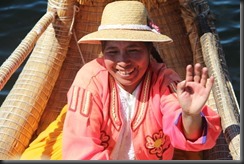 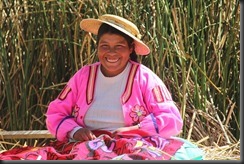 And just like that, it was time to farewell Peru, a country that has offered us a huge range of experiences.  Its landscape has surprised many, with the desert coast hitting the sea and then rising up into the mountains.  The scenery has been amazing, the people friendly and very traditional in their dress and ways of life.  Peru has provided a fantastic range of experiences – from surfing to high altitude trekking; ancient ruins to modern cities – and offered more than a few highlights of the trip along the way.  But we had more to see – next stop, Bolivia!
Posted by Odyssey Overland at 05:01