Anyone want an umbrella?

Leaving Rio behind after a relaxed morning and another amazing buffet breakfast, we headed up into the hills.  Our destination was Petropolis, a colonial town to which the wealthy used to escape to during the height of the Rio summers.  The drizzle and rain that had dogged us in Rio continued, and so the best option for many was to head indoors and visit the Imperial Museum, while others helped out with the food shopping – when you are shopping for 24 people, extra hands are always welcome as there are plenty of bags to carry.  Sadly no cameras are allowed in the Museum, so you will have to take our word for the fact that it was worth a visit!

Winding further up into the hills we reached our destination, the small town of Teresopolis where we stayed at a campsite for the night and enjoyed a meat feast and a couple of bottles of sparkling wine to toast the newly engaged couple! 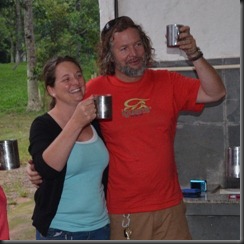 Returning along the same road for about 30km the next morning we were rewarded with some spectacular views which we had known were there, but hadn’t been able to see courtesy of low cloud the day before!  Lush forested hills, blue skies and cloud trapped in the valleys, it was a beautiful sight.
Our destination for the following two nights was the colonial town of Ouro Preto (translates as “black gold").  The town rose to glory during the Portuguese rule in the mid 1700s when gold was discovered in the area, and its cobbled streets and 23 churches are well-preserved.  And very beautiful.  But again you will have to take our word for it as no one was too keen to get their cameras out as our stay in Ouro Preto coincided with some of the heaviest rain we have seen on the trip so far!  Steep cobbled streets became rivers, and umbrellas were the hottest item in town, but it didn’t stop anyone exploring the town.  The sun did make a brief appearance – but only to farewell us as we continued our journey towards Brazil’s Atlantic coast.

Posted by Odyssey Overland at 06:42