Piranha fishing in the Pantanal

The Pantanal is the world's largest inland wetland area, roughly half the size of France, and is somewhere we will be visiting twice on this expedition. It is an area that teems with wildlife, and almost as soon as we crossed into the area we started seeing life everywhere including brightly coloured toucans, agouti, deer, quati and even caiman lounging in pools of water below the road while jabiru walk (quite carefully it seems!) around them.
For our stay in this southern section of the Pantanal our base was on a farm, in a campsite on the edge of a river - given the heat we were all keen for a dip until we looked down the banks towards the caiman which were sunning themselves on the sand. Although (in theory) they aren't aggressive towards humans, it wasn't a theory any of us were willing to test... not even Duncan! 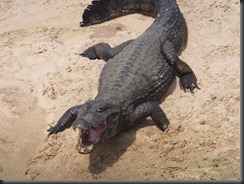 Didn’t fancy a tent in this heat? Don't worry, there were plenty of hammocks available for a snooze during the day, or at night in the hammock "dorm" which several of the group opted to try out in preparation for the upcoming Amazon boat trip where hammocks are the only option for a couple of nights.
Arriving into the camp around midday, we were given a briefing on the activities that we would be doing during our stay, and it was clear that it was going to be a busy time - horse riding, boat trips, piranha fishing, game drives, night drives... And we met the camp staff and guides as well as the cooks who seemed to work almost endlessly to ensure we had delicious meals, including some lovely traditional dishes.
For the first two activities, horse riding and and the boat trip which included a chance to go piranha fishing, we were split into two smaller groups lead by Tom and Pedro, our local guides.
The focus of the activities was to experience the wildlife in different ways and have the best chance of seeing some of the rarer species including jaguar (of which a recent paw print was seen, just to tease!).

Jeanne found her outing on the horse somewhat diminished her love for riding after an unexpected gallop, while the boat trip brought out the competitive side of many of the group, with the first group claiming the honours for the most fish caught (and they argue, the biggest fish as well), perhaps the second group should have left Pete back in camp as his fishing skills (or rather lack of fishing skills) are legendary on several continents! 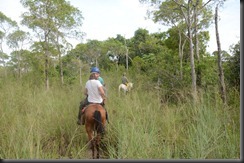 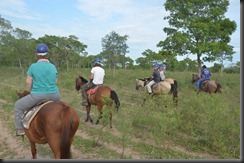 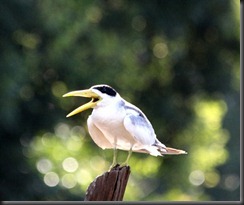 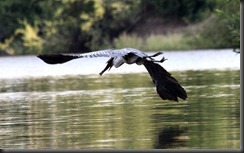 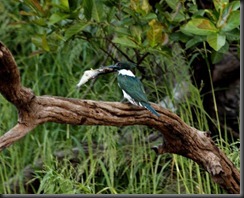 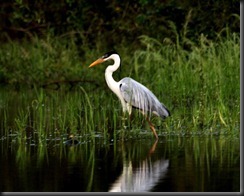 Apart from the rather fearsome piranha, other wildlife spotted while we were in the Pantanal included howler monkey, two foxes who wandered through camp, capybara, hyacinth macaws and caiman. In fact, some of us had a rather close encounter with a caiman after Mikkel, our very own Crocodile Hunter, walked back into camp one evening holding a rather large caiman, much to everyone's surprise, but Vanessa's in particular, causing her subsequent comment to be un-blog-friendly! But very funny!

The caimans were also a highlight of the final activity which saw the whole group head out on an afternoon and then night drive to search for wildlife, including a visit to a small waterhole populated with a truly unbelievable number of caimans. 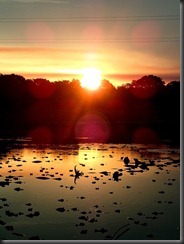 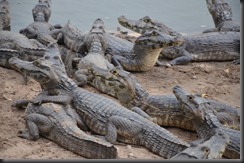 To celebrate our final night at the camp, we were treated to a Brazilian BBQ, complete with some cachaca infused with honey and cinnamon which was enthusiastically imbibed by some of the group, who were a little less enthusiastic the next day!
Unfortunately for those slightly under the weather, it was an early start as we started the first of a couple of drive days which reminded us of the sheer scale of Brazil. The largest country in South America, it makes up over half of the continent. On a world scale, only Russia, China, Canada and the USA are larger. The main roads in Brazil vary from huge dual carriageway motorways to winding single lane carriageways with broken tar, pot holes and unmarked hazards! But no matter what road you are on you can be assured you will be sharing it with plenty of trucks carrying freight, some of which can be up to 30 metres long which makes overtaking quite an undertaking (see what I did there?). The upside of all this trucking is the amazing truck stops along the way - facilities can include toilets (some of which have toilet paper, hand soap and hand towels thus earning them a 5 out of 5 in our view), showers (where you can find whole families doing their daily ablutions), snacks (deep fried goodness), all you can eat or by the kilo restaurants, and one even had a patisserie with incredible chocolate eclairs! Ah, its the small things, and on a journey like this, you can take the time to appreciate the the small things in life, as well as the big ones. Happy days on the road.