Most days everything goes to plan.  Some days, something doesn’t go to plan.  And then occasionally you have a day where nothing goes to plan.  We had one of those on our drive away from Ciudad Bolivar.  Queues for diesel, bad roads and diversions, traffic, crazy drivers, full hotels, dinging the truck, taking down wires, GPS leading us astray in small towns, the spare tyre dislodging – yep it all happened in the space of about 12 hours leading to a very late arrival into Maracay, our gateway to the Caribbean coast of Venezuela.  Fortunately we had arrived at a lovely pousada, and after a bit of takeaway pizza we all headed to bed with relief.
The next day we only had 60km to cover to reach the Henri Pittier National Park, but our journey would take us up and over an incredible mountain pass which was only just big enough for Ithaca in some places.  As we started to wind up the pass the landscape was dry and scrubby but rapidly changed to bamboo into dense cloud forest as we reached the top at 1,600m and then started to descend towards the coast.
Henri Pittier National Park is Venezuela’s oldest national park, and the town of Puerto Colombia is located within the park itself.  A small, sleepy hamlet (particularly sleepy given the ban on alcohol following the president’s death which seemed to encourage the restaurants in town to close their doors), it was the perfect place to relax for a couple of days and enjoy a bit of Caribbean coast time and our first beaches since Brazil in early February.  There were plenty of walks available for those wanting a little exercise, and Anthony and Geoff set off for a full day exploring the park with a guide.  Others headed off in boats to reach more beaches or do a spot of diving, while some of the group were content to just enjoy the Grande Playa at Puerto Colombia and the town’s chilled vibe.
While in Puerto Colombia we celebrated Vanessa’s birthday with a BBQ at one of the pousadas we were staying at.  A delicious feast, topped off by Mikkel presenting Vanessa with one of the more unusual birthday gifts she had ever received – a tortoise complete with tinsel decoration!  Sadly due to the crew’s draconian “no pets” policy, the tortoise had to remain resident in Puerto Colombia, but we enjoyed his (or her) company for the evening.
Returning back over the mountain we spent a night at a lovely rafting camp.  Getting the truck into the campsite was quite interesting, with narrow roads and steep inclines, but getting it out the next day was to prove even more so for Pete and Kirsten who were heading straight to Merida with the truck while the group went into the Los Llanos wetlands area of Venezuela by Landcruiser.
Los Llanos is wildlife viewing heaven – wilder and less developed than the Pantanal in Brazil, it delivered on all promises giving everyone the chance to see the usual suspects (caiman and capybara) as well as anaconda,giant anteater and an incredible variety of birds including the stunning scarlet ibis. 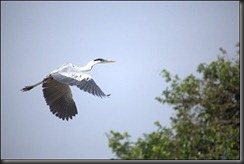 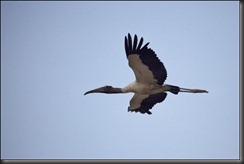 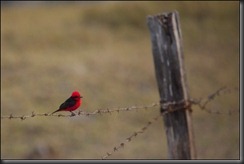 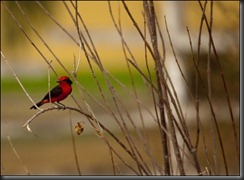 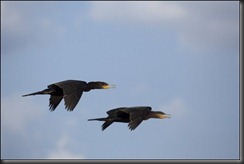 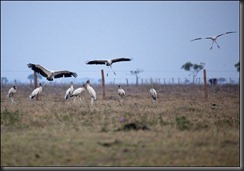 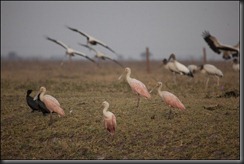 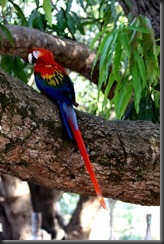 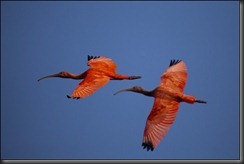 Part of the appeal of Los Llanos, and of Venezuela as a whole, is the wildness of the place, but that wildness also translates into some interesting roads and driving, and a lack of some of the infrastructure that we had become used to in the earlier countries we have visited.  It was a long drive for the group back to Merida, up and over a 3,600m pass where winter coats were suddenly cherished again, having languished in the bottom of bags for months now!

Merida is considered to be the adventure capital of Venezuela, with virtually every extreme sport available.  Thanks to the in-country exchange rate which is currently over 3 times the official rate, we were lucky to be able to enjoy the activities at a fraction of what they might cost in other countries, and this encouraged most of the group to get out there and do as much as possible.  Mountain biking, canyoning and paragliding were the top 3 activities, with a fourth one (managing to finish a whole burger from the local burger van – they were huge!) coming in close behind.
Exhausted after a couple of days in Los Llanos followed by the excitement of Merida, Ithaca was a welcome sight outside the hotel on the morning of departure.  Our destination was to be Maracaibo, and reports about the state of the road varied so we had factored in two days for the drive.  In the end we were able to do it in one day giving us an extra day in hand for further down the line (which we used to good effect in Colombia, but more about that in a future blog!).

Maracaibo showed us a different side of Venezuela.  Until now we had avoided big cities, deterred by Caracas’ terrible reputation and focussing on the natural beauty of the country instead, but Maracaibo was a necessary stop on our way to the border with Colombia.  The capital of Venezuela’s richest state, Zulia, the city skyline is dominated by tower blocks, very different from the traditional housing we were used to seeing.  Eating out at night there were fancy restaurants for those who wanted, but even at ordinary restaurants the local population is more dressed up than we have seen elsewhere in Venezuela (and certainly more dressed up than your average overlander!), adorned with flashy jewellery and carrying the newest mobile phones.  The money in Maracaibo is predominantly oil-based as the lake of the same name, on the edge of which the city sits, is home to one of the world’s largest oil fields which was discovered in 1917.
Heading to the border early the next morning, it was time to reflect on what we had seen and done during our couple of weeks in Venezuela which just seemed to have flown by!  Angel Falls and the waterfalls of Canaima lagoon, the wilds of the Los Llanos wetlands and adrenalin plus in Merida.  But of course that doesn’t cover it all – overlanding gives you a different perspective on a country.  No description of overlanding in Venezuela would be complete without mention of the cars on the road – big old American “yank tanks” dating from the 1940s, seemingly held together with paint and rust (and the occasional piece of rope) travel along side shiny new V8 powered 4x4s which rumble past taking advantage of the almost-free fuel (Steve created overlanding history by being the first expedition member to volunteer to pay for a tank full of fuel for Ithaca – 200 litres costing in the region of US$1.50 (in total, not per litre!) at the official exchange rate, or around $0.50 at the in-country exchange rate)!  Open-top pick-ups / utes drive by with standing room only inside.  Political slogans and billboards dominate the roadside in Venezuela, even being painted on the sides of houses and the rear windows of cars.  Windscreens are blanked off against the sun (somewhat disturbingly, forward vision seems not to be a priority…) or covered in religious images or more political slogans.  It certainly made for some interesting journeys, but isn’t that all part of the adventure?
ps – a big thanks again to all our expedition members who let me use their photos in our blog - this update has been brought to you by Steve, Lisa, Geoff, Sue, Tony, Francois and Heather.
Posted by Odyssey Overland at 15:21