Hello and welcome to my country. Hello, where are you from? Do you like Colombia? You are welcome, and please tell your friends about my country so they can visit too!

Colombia may well be the friendliest country we have visited on any of our expeditions around the world, and it has become a serious contender for our favourite country in South America.  A far cry from the preconceptions of many about Colombia - land of drug barons, cocaine wars and sky high crime levels, and far too dangerous to travel to – our experience of Colombia was a country realistic about its past, enthusiastic about its future, and open and welcoming to those who visit.

Where to start? Well it must be said that our time in Colombia didn't have the most auspicious start as we enjoyed (endured?) our longest border crossing to date, and certainly the most hectic! We arrived at the border to find cars parked up in every direction, buses queuing in front of us and people everywhere! It was busy and crazy, more like an African border crossing than anything we had experienced in South America so far (memories of the calm borders between Chile and Argentina, and of course clean toilets at a border faded fast).  It took us 7 hours in total to clear the formalities to leave Venezuela and enter Colombia.  But don't despair, those hours certainly weren't wasted! Heather took the opportunity to put the truck library into alphabetical order. Steve taught a child how to gamble. Many of the group including Robin and Karen made friends with a heavily armed policeman and had their photo taken with him. We ate, we wandered, we speculated on how much longer we would be there, we talked about experiences new and old...  And finally, when we were on the truck rolling through the first (of many!) police and army checkpoints, we cheered at the prospect of exploring our 5th country on this epic expedition.
Immediately we crossed the border we were able to see a change - vegetation changed, becoming sparser, drier and more desert-like.  Traditional dress, and evidence of a more traditional way of life was visible along the roadside.  Cars changed, becoming more modern (goodbye old rusty American saloons from the 1950s, hello Kia, Chevrolet, Hyundai and, disappointingly, Ssangyong!). Police and military checkpoints dominated our first 80km, but as with the police and army that we have experienced all around South America so far, they were curious more than concerned, and their inspection of the back of the truck was really just an excuse to have a sticky-beak inside the big blue and orange truck.

The long delays at the border meant that we weren't able to get quite as far as we had wanted, but here Colombia started to work its magic as we ended up at a campsite we hadn’t visited before - having arrived in the dark it was only the next morning that we were able to wander down to the river, and see what a beautiful spot we had managed to find!  It had been a long day, so after a delicious dinner which Mikkel had volunteered to cook, we headed to bed. 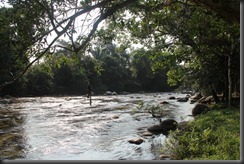 With only a short distance to cover the next day, it was a relaxed start with pancakes for breakfast before we loaded onto the truck.  Stopping to buy food in a small village along the way gave everyone a chance to have a wander while the crew picked up some fresh meat and vegetables.
On our drive we got our first glimpse of Colombia's Caribbean coast, and we liked what we saw! Stunning blue water fringed with white sand and palm trees, it was the stuff of postcards.  We were able to get a much closer look when we arrived at our amazing campsite right on the beach amongst coconut palms. 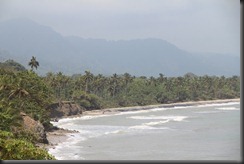 Tents were put up, the kitchen set up and then we all set about the serious task of relaxing.  Walks along the beach, swimming in the surf (quite an adventure) or the lagoon (much calmer!), drinks at the bar, beach bonfires, eating fresh coconuts, watching Terry surfing and Anthony and Francois body boarding, sunbathing, snoozing in hammocks, taking photos, chatting to local Colombians abut our journey and why we travel, updating blogs ready for our next Internet connection, putting the world to rights while watching the sunset over the ocean...  It was a busy time!

It was a somewhat reluctant departure after our couple of days here, but perhaps many would not have been so reluctant if we had known what was coming...
Cartagena - Colombia's second oldest city, a UNESCO World Heritage Site, and a city that can lay claim to being one of the most beautiful we visit on this expedition. 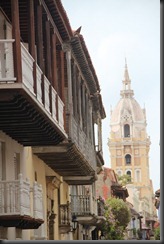 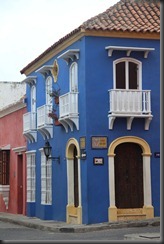 Cartagena was founded in 1533 and became and important trading point for gold, emeralds, silver and slaves.  As a result it became a very wealthy city, the downside being that it's wealth ensured everyone wanted a piece of the action, and so it was regularly attacked, successfully and unsuccessfully.  Finally, the city decided to build another line of defence, and constructed the thick walls that still encircle the old town.

Today, the old city is a wonderfully preserved and restored town, with remarkable colonial and post-colonial architecture.  Our hotel was located only a 2 minute walk from the old town, many rooms having views over the old fort and the monastery high on the city's tallest hill.  We arrived (after a short battle with the city's one-way system) in time to watch the football (a World Cup qualifier between Colombia and Venezuela) and crowds had started to gather in front of small TVs set up in restaurants on the square and on street corners around the hotel, sitting drinking beer while waiting for the game to start.  Sadly the game didn't go Colombia's way, but the atmosphere was great, very friendly and relaxed with everyone just enjoying watching the game, applauding and appreciating good moves on both sides, with none of the aggro we often see in the UK.

For those not so keen on football, it was time to explore the city's many restaurants and bars - Cartagena is a culinary gem with fantastic food available to meet cravings for almost every world cuisine - from ceviche (raw seafood "cooked" in lime juice), to a Thai curry (courtesy of a great new Colombian-British owned cafe bar), to massive Argentinian style steaks and cheap and cheerful set menus with soup, meat and rice and dessert.
To make the most of our time in Cartagena, we headed off on a guided walking tour of the city, with our fantastic guide Jose who gave us plenty of in formation about the city, but also about Colombia and what it is like to live there - he proudly told us that Colombia now has the second strongest economy in South America (Brazil leads the way), low unemployment, a strengthening currency and increasing foreign investment, and a democratically elected president with a 2-term restriction. Jose’s enthusiasm and positive outlook for his country is something we have experienced from everyone we have spoken to here. 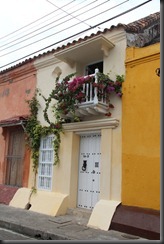 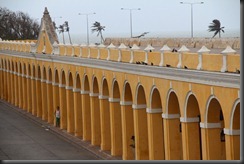 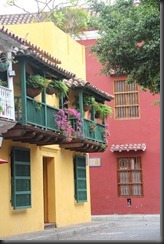 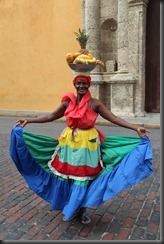 Cartagena is also home to some great museums – the gold museum, inquisition museum and maritime museum – as well as markets and churches, so there was plenty to keep everyone busy. 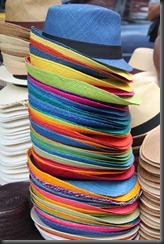 Tony led the charge for a diving trip to the nearby Corales del Rosario marine reserve, with Francois, Kirsten, Heather and Pete all joining in on a great day involving multiple boat trips and a lot of laughs.  Oh, and some great diving as well!