Farewell Colombia, we will be back!

Leaving Cartagena behind, we headed south towards Medellin via a bushcamp in the hills.  In the 1980’s and 1990’s, Medellin was the centre of the cocaine industry and home to Pablo Escobar, and was one of the most dangerous cities in the world.  But despite the recent history, Medellin is now considered one of the more accessible cities in Colombia, albeit with a more edgy feel than Cartagena. 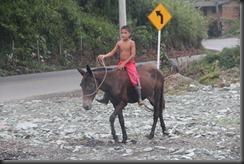 Medellin is a very big city, and unlike Cartagena with its compact historical centre, Medellin’s major sights of interest are spread around the city, so a walking tour was out of the question.  Instead we took Ithaca out for a drive around the city with a local guide on board, pleased that being Easter Sunday, Medellin’s chaotic traffic was not in evidence.
To get our bearings in this huge city, our first stop was Nutibara Hill which gave us a panoramic view over the city, and where our guide started to explain some of the history of the city as well giving us a perspective on the city’s neighbourhoods and what it is like to live here today. 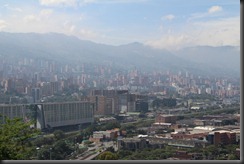 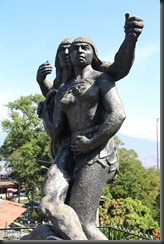 From Nutibara Hill we headed for the most unusual stop on the tour, the Parque de los Descalzos (Bare Foot Park).  Based on some principles of reflexology (yep, we thought it was a city tour too!), it started with a walk through a bamboo forest on (rather sharp) stones, the bamboo symbolising how families that work together grow stronger.  We were then guided to a patch of grass where we were told that all the static electricity from the appliances we all use would disappear from our bodies, and we were encouraged to hug a tree to reduce our stress levels.  The next stage was to walk along sandy paths with our eyes closed through a series of pylons forming a maze (designed to increase our self-esteem by giving us the confidence to walk with our eyes closed), and then over some more pylons (fortunately with our eyes open!  No explanation given as to why).  The final stages involve water – sitting with our feet in a pool of water we were guided through how to give ourselves a foot massage, and then finally we moved to the spa pool where the bubbles completed our relaxation process!  It was a little bit “new age” for some of the group, but our feet have never been cleaner!
Leaving our stress (and dirt) behind, our next stop was Plaza Botero which is described by Medellin Tourism as “a symbol and example of social transformation in the city, as the area where it is located was previously extremely underdeveloped and neglected”.  The tourism authority then goes on to say that the park is now a place for “fun and wholesome entertainment”.  As we parked up next to some prostitutes working the street corner, I am not sure it quite lived up to the wholesome part, but the plaza itself was great, a showcase for 15 sculptures by the region’s most famous sculptor, Fernando Botero. 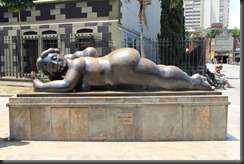 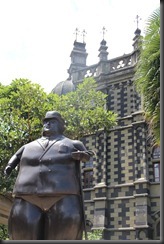 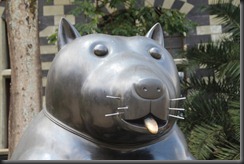 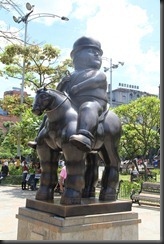 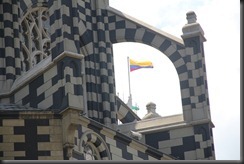 Leaving Ithaca for a while, we hopped onto the city’s clean and efficient metro system before catching the cable car up to Santo Domingo.  Designed in part as a transport system for the poorer areas that reach up the hill, it now serves locals and tourists alike, and for the bargain price of about $2 we were able to ride the metro and the cable car, much to Heather’s delight!
The city’s botanical gardens are well worth a wander, and many of the group headed there after the tour while others returned to the hotel to either recover from, or prepare for, a night out.  Despite it being the Easter weekend, several of the group sampled the city’s nightlife – after all, there’s always a party somewhere if you want to find it!

Big cities are great to visit, but most of us feel more at home away from the hustle and bustle – and our next stop was exactly that – a coffee finca (farm) in the beautiful hills of the coffee growing area.  Coffee is big business in Colombia and we could see the crop being grown on endless hills as we drove along the Coffee Highway.  Coffee tours, coffee tastings and free espressos kept our coffee-aholics happy, while the pool, hammocks, and walking paths around the grounds meant there was something for everyone.  Apparently espresso coffee has less caffeine than filter or percolated…  but we didn’t see much evidence of that as several of the group were pretty hyped for a couple of days!
A great location and relaxed stay calls for great meals, and a marinated roasted pork loin was the order of the day for our first night, with lasagne the following night (although slightly delayed by a huge storm that blew through just at serving time!).  Delicious.
A short drive took us to our next destination – and a new destination for everyone on board – after all, this trip is all about “exploration and adventure”.  The small town of Salento is a fantastic place to wander around or enjoy a game of tejo (sort of like boule, but with gunpowder and beer…), and also boasts stunning walks through the cloud forest and 60m tall palm trees, an incredible variety of hummingbirds, hospitable hosts and great food.  A wonderful spot and somewhere we are keen to spend more time in the future. 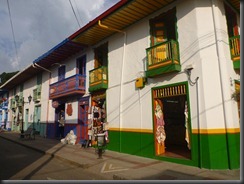 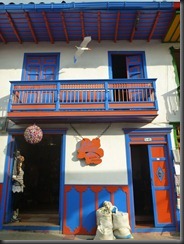 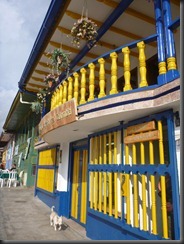 Continuing our journey south, we had a couple of nights in the city of Popayan, known as the “the White City”.  Churches and colonial buildings were the order of the day in the city (as well as an incredible cheese fondue or two!), while the surrounding hills offered hot springs, mountain-biking and strawberries and cream.  A free salsa lesson provided endless entertainment for the receptionist at the hostel, and some of us later headed to a nearby salsa club to show off our moves (or, more realistically, to try to remember the steps and not step on each others’ toes!) 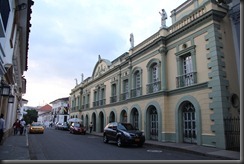 Colombia is certainly a very hilly country, and even the Panamerican Highway (a rather grand term for the road in some places!) saw our average speed reduced to around 30kmh for some sections where the road wound around the hills and overtaking opportunities were few and far between!  Plenty of time to enjoy the stunning scenery enroute to our final stop in Colombia, the town of Ipiales, located just a couple of kilometres from the Ecuadorian border.  The Las Lajas Sanctuary is just a short distance from the town, and a few of the group headed off in taxis early the next morning to wander the sanctuary, made spectacular both by its location and its architecture. 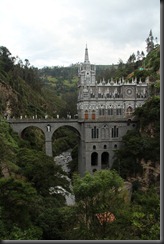 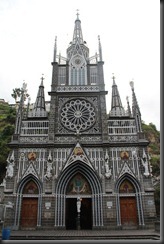 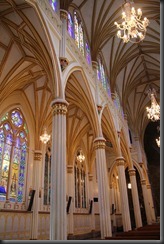 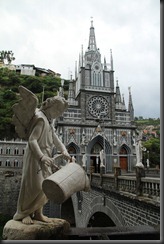 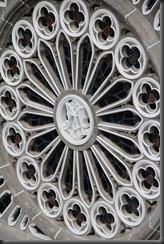 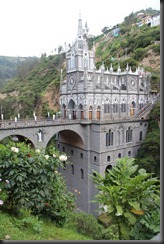 And then it was time to say farewell to Colombia.  It is a country that has surprised and impressed, and somewhere we felt very safe and welcome.  We are looking forward to bringing many more groups here in the future.
Posted by Odyssey Overland at 07:54